The coffee table book features 36 uplifting stories of Overseas Filipino Workers (OFWs) whose shining example, inspiring dedication and excellent performance in their respective fields have helped in shaping their communities and the nation.

Their stories are highlighted in this book. They are fine exemplars of how courageous we should become on the verge of challenges. They share one thing in common- a firm belief that there’s no barb wires at all in the desert of gold in attaining the wildest dreams captured by their imaginative minds. They’re record-breakers. Truly, their true stories are worth telling.

The book was released with an official book launch held on July 31, 2014 at The Asiana Hotel, Dubai, United Arab Emirates. The event was graced by Consul Giovanni Palec and FilCom President Matilyn Bagunu. Read More: ‘Desert of Gold’ features Filipino leaders in UAE in Rappler

The book entitled Filipino Heroes in the Gulf, the first of its kind in the Arabian peninsula, is now available in the market. The book was printed in July 2016 in Quezon City, Metro Manila by Central Book Supply, Inc.

The compilation chronicles the struggles of 36 Filipino trailblazers from five countries belonging to the Gulf Cooperation Council (GCC) states. These are Oman, Saudi Arabia, Kuwait, Qatar and United Arab Emirates.

This is the second book of Ulysses Viriña Espartero, who finds fulfillment in documenting the untold stories of Overseas Filipino Workers (OFWs) in the desert. He said, “I have been into challenges and sacrifices these past few months. I was afraid this second book would not materialize. God is so good that I can’t refuse to carry the heavy burden that lies on my shoulders. Book writing is a tormenting challenge for us in this digital age but if this is the best way that I can be remembered, so let it be. Pen is the only sword I have as a lonely soldier. With this, I shall always emerge victorious.”

Behind the Domes of Majestic Mosques (2017)

This work Behind the Domes of Majestic Mosques is an attempt to chronicle the struggles, the sacrifices and victories of Filipinos who toil day and night in various corners of  UAE. Yes, behind the glittering mosques, there are countless  migrants trying to make ends meet. And there are lucky, courageous men and women of the  Pearl of the Orient Seas who  did it right and made it big.

If you have been to this country, you will notice that in almost corner of the suburb, there stands mighty a symbol of their Islamic faith, the same belief from which the monarchy established its rules for all its residents and migrants to abide. For me, the dome represents our aspirations to successfully hurdle the challenges of times in a territory unknown to us.

The Quest for Greener Pastures (2017) 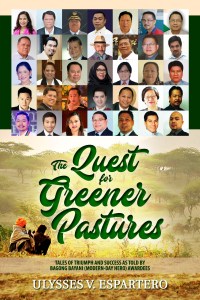 I feel privileged to compile the tales that rekindle the living inspiration of sea-based  and land-based migrant workers, from across the globe, for their invaluable contribution to the country’s coffers, culture and professional global stance. Featured in the book are 35 migrant profiles from 17 countries and states including Bahrain, Canada, China, Hongkong, Italy, Japan, Jordan, Kuwait, Myanmar, Qatar, Saudi Arabia, South Korea, Taiwan, Thailand, United Arab Emirates, United States of America and Yemen.

Allow me to thank the Modern-Day Heroes for sharing their stories. It took me countless sleepless nights to complete this fourth book. I fervently hope that this work of mine shall serve as a spring of lasting inspiration to those in search of greener pastures.

This time, I feel empowered to share new tales of sacrifices of Filipino workers from the Kingdom of Saudi Arabia, a desert country encompassing most of the Arabian Peninsula, with Red Sea and Persian (Arabian) Gulf coastlines. Known as the birthplace of Islam, it’s home to the religion’s two most sacred mosques: Masjid al-Haram, in Mecca, a destination of the annual Hajj pilgrimage, and Medina’s Masjid an-Nabawi, a burial site of the prophet Muhammad. Riyadh, the capital, was transformed into a skyscraper-filled metropolis.

The formal diplomatic relations between the Philippines and KSA were established on October 24, 1969. In 1973, the Filipinos first arrived in Saudi Arabia, when a group of Filipino engineers migrated to the country. My fifth book Out of the Darkest Times chonicles the stories of men and women from the Arab Kingdom specifically from Makkah, Al Khobar, Dammam, Jeddah and Riyadh.

In this book, read about the Filipino men and women in the United Arab Emirates who turned struggles into success.

This work was produced in the Year of Zayed (2018) which marks the centennial year of Sheikh Zayed. According to Saeed Al Nabouda, Acting Director General of Dubai Culture, the Year of Zayed is an incredibly important and precious occasion for the whole nation, as it encourages us to remember and cherish the values that the late Sheikh Zayed instilled in us all.

Al Nabouda stressed that the late Sheikh Zayed’s principles and values were and will remain the foundations of the UAE, while his leadership continues to be a source of inspiration to the world.

Influential Filipina Women in the Gulf (2019) 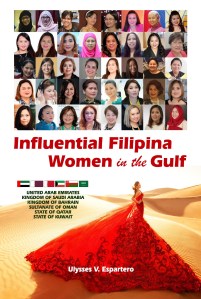 Allow me to tell you stories of men and women from the Gulf region. This compilation is an addition to the six book titles under my name which were released previously.

This time, I feel blessed to share new tales of sacrifices of Filipino workers from the Persian Gulf (or the Arab States in the Persian Gulf) particularly those who have lived and worked – and still working – in the Islamic states of United Arab Emirates, Kingdom of Saudi Arabia, Sultanate of Oman, Kingdom of Bahrain, Kuwait, Hashemite Kingdom of Jordan and Qatar.

These are all oil-producing countries bordering the Persian Gulf in southwest Asia. An extension of the Arabian Sea, positioned in the heart of Middle East, the Persian Gulf is certainly one of the most vital bodies of water on the planet, as gas and oil from Middle Eastern countries flow through it, supplying much of the world’s energy needs.

100 Most Influential Filipino Engineers in the Gulf (2019)

While I have been writing for years about Filipinos in Europe, Middle East and Africa (EMEA) regions, I felt it was impossible for me to pursue this book project because it was hard connecting with people who are all occupied by their respective career priorities not to mention their desire to fulfill their obligation to their families.

In God’s will, I successfully managed to interview engineers from six states in the Gulf – Kingdom of Saudi Arabia, United Arab Emirates, Sultanate of Oman, Kingdom of Bahrain, State of Qatar and State of Kuwait.

There is no question that this is the first published book about Filipino engineers in the Gulf but what warms my heart more than the recognitions that come with the completion of this work is an awareness that I am able to inspire and motivate others.

Thirst for Excellence in an Islamic World (2020)

The Kingdom of Saudi Arabia is known for its oil and display of glittering gold. Filipinos in search of a wonderful life for their respective families back home have come to the desert to fulfill their dreams.

This book is a compilation of stories as told by Filipino engineers who have lived and worked or still working in the Arab Kingdom. While not all Filipino professionals featured in the book directly work for the oil and gas industry, the term “oil pipelines” represent, as I believe, a country that mainly cultivates its vast oil reserves.

In this book, read about the Filipino men and women who turned struggles into success. 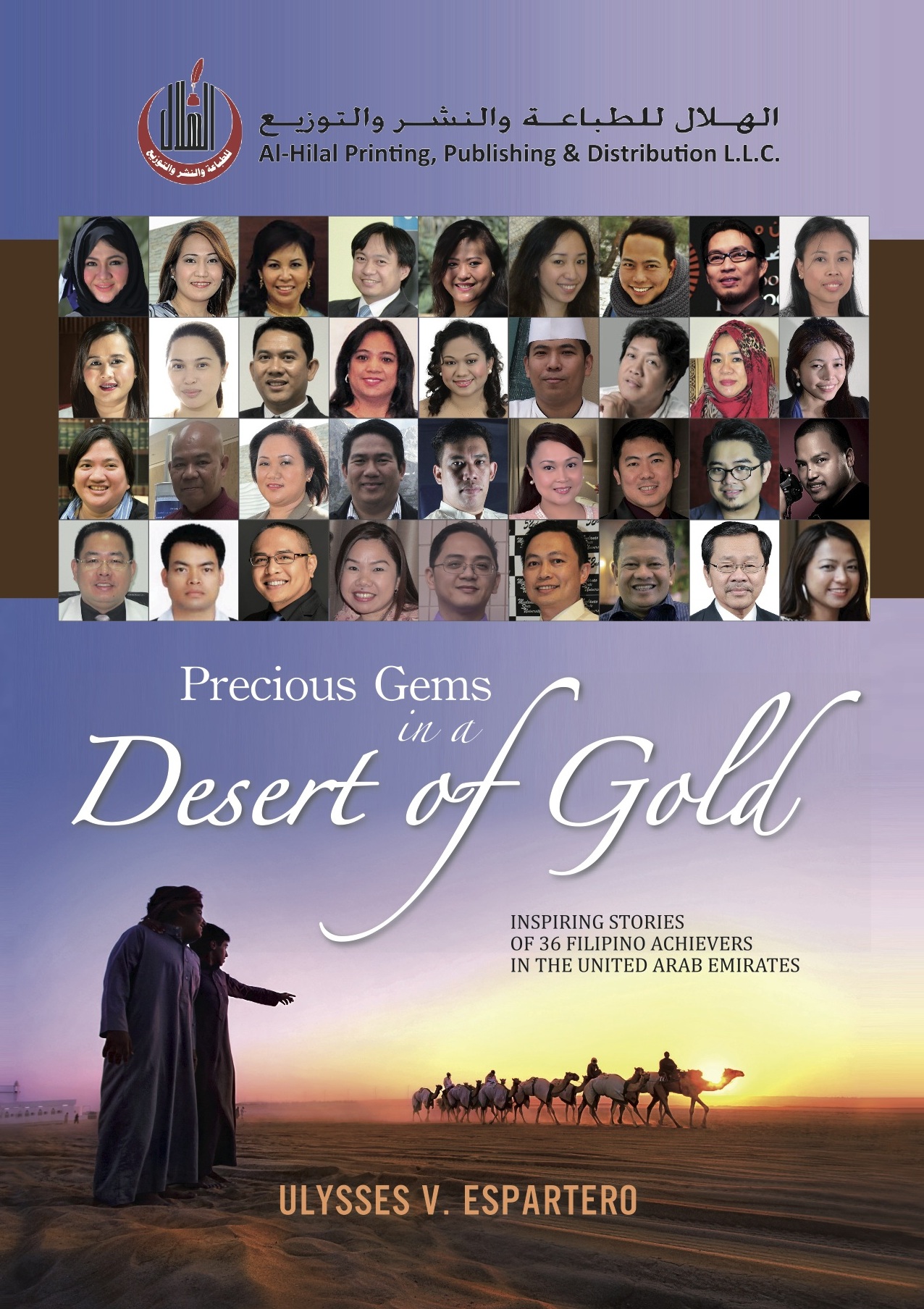 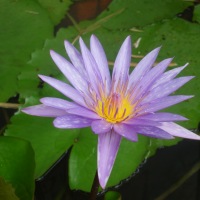 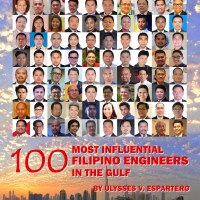